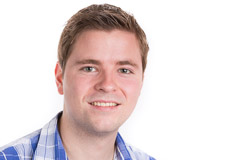 Gijs Adrianus Gerardus Marie Hendriks was born in Venlo, the Netherlands on June 4th, 1990. He obtained his pre-university education diploma (VWO) at College Den Hulster Venlo in 2008. Motivated by the interests in physics, engineering and medicine, he chose the subject of Biomedical Engineering at the Eindhoven University of Technology, and received his B.Sc and M.Sc. degrees in 2011 and 2014, respectively. During his master’s program, he did an internship at the Magnetic Resonance Center of Newcastle University, Newcastle-upon-Tyne, United Kingdom. This internship involved the design of MRI protocols in assessing metabolites, fat and other molecules in skeletal muscle of patients suffering from dysferlinopathy. His Bachelor and Master thesis projects were accomplished in the research groups of prof.dr. Peter Hilbers (Computational Biology) and prof.dr. Klaas Nicolay (Biomedical NMR). During these projects, he developed magnetic resonance spectroscopy (MRS) protocols and computational models to assess and analyze energy metabolism in human skeletal muscle.

In 2014, Gijs started to pursue for a PhD under supervision of prof.dr.ir. Chris de Korte at the Medical UltraSound Imaging Center (MUSIC) of the Radboud university medical center in Nijmegen, the Netherlands. His research interest was switched from MRI to medical ultrasound. Gijs’s study was part of an Open Technology Program project granted by the Dutch Technology Foundation entitled “3D Ultrafast Functional Ultrasound Imaging for Detection of Tumors in Breast” that focused on the implementation of 3D elastography and ultrafast ultrasound imaging techniques on an automated breast volume scanner to improve the specificity of diagnosing malignant breast lesions. His work included the design, evaluation and in-clinical validation of these techniques as described in this thesis. As part of this project, he did multiple internships at Siemens Healthineers, Issaquah, WA, USA to implement those techniques in their ultrasound devices. Since Gijs enjoyed his unique role between academia, hospital and industry, he decided to continue his work on the follow-up project related to his PhD project as a post-doctoral researcher. In this new project, a collaboration between MUSIC and Siemens Healthineers, he works on integrating 3D ultrasound and tomosynthesis in a new device for improving the detection of breast cancer.